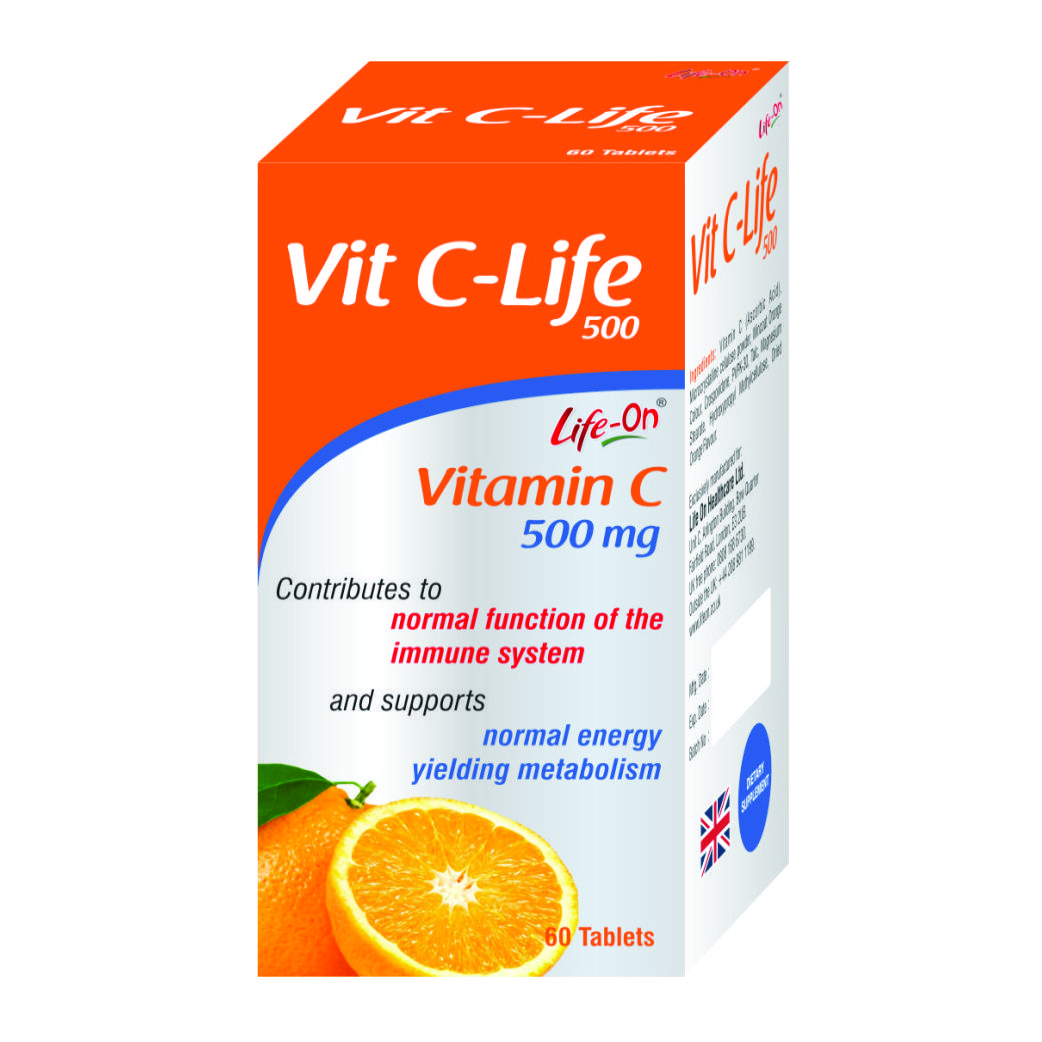 Product information
Vitamin C, also known as Ascorbic Acid and L-Ascorbic Acid, is a vitamin found in food and used as a dietary supplement. As a supplement it is used to treat and prevent scurvy.  Vitamin C is an essential nutrient involved in the repair of tissue. Vitamin C including ascorbic acid and its salts, and some oxidized forms of the molecule like Dehydroascorbic Acid. Vitamin C is a cofactor in at least eight enzymatic reactions, including several collagen synthesis reactions that, when dysfunctional, cause the most severe symptoms of scurvy. Ascorbate also acts as an antioxidant, protecting against oxidative stress (1). In humans, vitamin C is essential to a healthy diet as well as being a highly effective antioxidant, acting to lessen oxidative stress.

Why Life On Vit C-Life 500?
Life On Vit C-Life 500 has ascorbic acid which has the highest measurable amount of biological activity when taken through supplement. It maintains highest concentrations in blood when taken as supplement, experts believe that the recommended intakes for vitamin C (45 to 90 mg daily) are several orders of magnitude too low to support optimal vitamin C functionality (2).
Life On Vit C Life 500 has Vitamin C providing the complete Vitamin C supplement. Signs of vitamin deficiency include dry and splitting hair; gingivitis (inflammation of the gums) and bleeding gums, rough, dry, scaly skin, decreased wound-healing rate, easy bruising, nosebleeds and a decreased ability to ward off infection. A severe form of vitamin C deficiency is known as scurvy (3). Low levels of vitamin C have been associated with a number of conditions, including high blood pressure, gallbladder disease, stroke, some cancers and atherosclerosis, the buildup of plaque in blood vessels that can lead to heart attack and stroke (3).

Benefits of Life On Vit C-Life 500
Vitamin C plays an important role in protecting against Heart Disease it is helpful for preventing heart attack or stroke are mixed. Vitamin C doesn't lower cholesterol levels or reduce the overall risk of heart attack. vitamin C can slow down the progression of atherosclerosis (hardening of the arteries). It helps prevent damage to LDL ("bad") cholesterol, which then builds up as plaque in the arteries and can cause heart attack (3).
Vitamin C plays an important role in lowering risk of high blood pressure than people who have poorer diets. Eating foods rich in vitamin C is important for your overall health, especially if you are at risk for high blood pressure (3).

Vitamin C may be associated with lower rates of cancer, including skin cancer, cervical dysplasia (changes to the cervix which may be cancerous or precancerous, picked up by pap smear) and possibly, breast cancer (3).
Vitamin C is essential for the body to make collagen, which is part of normal cartilage. Cartilage is destroyed in osteoarthritis (OA), putting pressure on bones and joints Antioxidants such as vitamin C appear to limit the damage caused by free radicals. Involved in the destruction of cartilage (3).
Vitamin C (500 mg) appears to work with other antioxidants, including zinc (80 mg), beta-carotene (15 mg) and vitamin E (400 IU) to protect the eyes against developing macular degeneration (AMD), the leading cause of legal blindness in people (3).
Vitamin C along with vitamin E may help prevent pre-eclampsia in women who are at high risk. Pre-eclampsia, characterized by high blood pressure and too much protein in the urine, is a common cause of premature births (3).
Vitamin C also helps in Boosting immunity, maintaining healthy gums Improving vision for those with uveitis (an inflammation of the middle part of the eye) Treating allergy-related conditions, such as asthma, eczema and hay fever (called allergic rhinitis) (3).
Vitamin C helps in Reducing effects of sun exposure, such as sunburn or redness (called erythema) Alleviating dry mouth, particularly from antidepressant medications (a common side effect from these drugs) Healing burns and wounds Decreasing blood sugar in people with diabetes Some viral conditions, including mononucleosis. Although scientific evidence is lacking, some doctors may suggest high-dose vitamin C to treat some viruses (3).
Vitamin C contributes to maintain the normal function of the immune system during and after intense physical exercise. (4)
Vitamin C contributes to normal collagen formation for the normal function of blood vessels, bones, cartilage, gums, skin &teeth. (4)
Vitamin C contributes to normal energy-yielding metabolism, normal functioning of the nervous system, normal psychological function & normal function of the immune system. (4)
Vitamin C contributes to the protection of cells from oxidative stress, reduction of tiredness and fatigue, regeneration of the reduced form of vitamin E & also increases iron absorption. (4)