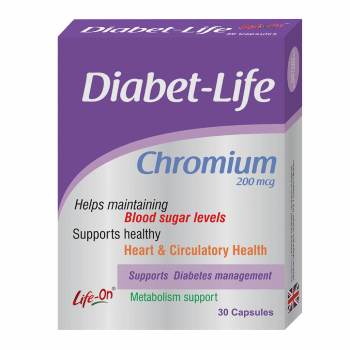 Product information
Diabetes is a condition in which the body's levels of blood sugar and the hormone insulin are out of balance. It is one of the most common diseases. Diabetes is a disease of metabolism, our body uses nutrients from food as carbohydrates for energy and growth, normally your stomach and intestines digest the carbohydrates in your food and convert into a sugar called glucose. Glucose is
your body's main source of energy(1).

After digestion, the glucose moves into your blood to give your body energy. The pancreas makes a hormone called insulin which gets the glucose out of your blood and into the cells of your body. If you have diabetes, either your body doesn't make enough insulin or your cells can't use the insulin. The Glucose levels rises up in your blood, causing diabetes, otherwise known as high blood sugar.

They are three types of diabetes(1).

Type 1, known as Juvenile diabetes, it is a condition in which the pancreas does not make enough Insulin.

Type 2 it develops when the body becomes resistant to Insulin and the pancreas can no longer make enough Insulin or it doesn't use the Insulin properly to keep blood sugar levels in balance. It also known as Adult-onset.

Gestational diabetes which occurs in pregnant women only during pregnancy.

Common symptoms of diabetes are unusual thirst, Fatigue, Frequent Urination, Extreme Hunger, Irritability, mood changes, cuts that are difficult and slow to heal, Tingling/numbness in hands and feet, Blurred Vision, Frequent Infections, for pregnant women, swelling in the hands and face it may also be symptoms of Gestational Diabetes(1).

Life On Diabet-Life has the unique formula with Chromium Picolinate, it plays an important in body regulating blood sugar levels similar as Insulin. It is a hormone that our body uses to change sugar, starches and other food into the energy(2).

The inability of Insulin to control the utilization and storage of Glucose is called as Insulin resistance. It is associated initially with elevated levels of circulating Insulin followed by Glucose intolerance which may progress to type 2 diabetes, Hyperlipidaemia, Hypertension, Obesity and Cardiovascular diseases(3).

Low Chromium levels can increase blood sugar, Triglycerides (a type of fat in the blood), Cholesterol Levels and increase the risk for a number of conditions, such as diabetes and heart disease(2).

Chromium acts as the cofactor of a low-molecular-weight chromium-binding substance known as LMWCr or Chromodulin. Chromodulin is thought to enhance the cascade of signalling events induced by the binding of Insulin to extracellular α-subunit of the Insulin Receptor (IR). Upon insulin binding, the tyrosine kinase domain of the intracellular β-subunit of the IR becomes activated and causes the phosphorylation of tyrosine residues in the β-subunit itself. IR activation triggers a series of rapid Phosphorylation reactions that activate many downstream effectors, eventually resulting in an increase in glucose uptake and storage(4).

Chromium supplements help in treatment of type 2 diabetes, it reduces the blood sugar levels, as well as the amount of Insulin(2).

It also shown to be effective in improving Glucose and Insulin metabolism in women with Gestational diabetes(5).

Chromium helps in Weight loss and obesity, Chromium is often used as a weight-loss aid and a way to improve lean muscle and reduce body fat and help people in lose weight and build muscle, plays an important role in strength training and commonly found in sports nutrition supplements(2).

Chromium helps in lower blood pressure, it lower LDL (Bad) Cholesterol and it also decreases the symptoms of depression in people with atypical depression(2).

Chromium supplementation on Glucose and insulin metabolism also assessed the effects of such treatment on Serum lipids(5).